As an office manager in a physical therapy office, I see people working on a variety of exercises to strengthen injured body parts. While the specific exercises they do vary, I often hear the therapists encouraging patients to be mindful of their posture. This may be surprising - "posture" seems a word more at home in a Victorian etiquette class or with a book balanced on one's head than in a therapeutic setting. However, holding our bodies in the optimal position for efficient and effective work is as much a part of our health as diet and exercise ought to be. In fact, posture is something I have to think about every day: when I type at my desk or answer the phone, it's tempting to sit on my feet or hold the phone between my ear and my shoulder. While those body positions may be comfortable in the short term, the asymmetry can lead to long-term pain and strain.

It's easy to go too far the other direction as well. As I feel myself start to slouch at my desk, I sometimes attempt too much correction to achieve proper posture, squeezing my shoulder blades together in an attempt to sit up straighter. Unfortunately, this exaggerated movement is also not a neutral spine position, and can be every bit as uncomfortable as slouching. To achieve a neutral spine - meaning that the three natural curves of the spine are present and in good alignment - try the following:
•   Open up your chest slightly and align your ears over your shoulders.
•   Sit smarter by keeping your back in contact with the back of your chair and your feet squarely on the ground. Try not to cross your legs.
•   If you work at a computer, position your screen to avoid straining forward and jutting your chin out. Be sure to seek proper corrective eyewear if needed.
•   When using a mobile phone, move your phone up instead of dropping your head to your phone to avoid "texting neck."

Posture is not simply a description of one's physical state - it is also often a reflection of one's emotional and mental state. I feel more relaxed and confident when I'm maintaining strong posture: I'm able to breathe more easily and do my job more efficiently because my body is well supported. Conscious awareness of your own posture is the best way to start making a change in both how you look and feel. Good posture can instantly make you look an inch taller, more confident, younger, and slimmer. Why not give it a try?
Posted by Lakeshore Physical Therapy at 10:14 AM

Whether you’ve used them or not, resistance bands are a common sight in any fitness area: the array of rainbow-colored tubes is easy to spot. First appearing in a patent for “a gymnastic apparatus” by a Swiss inventor in the late 1800s, resistance bands were once primarily used for rehabilitation and fitness, gaining popularity among therapists during the 1960s. As the modern fitness revolution took hold, the bands became attractive to the general public for their effectiveness, variety, convenience, ease of storage, affordability, and travel capabilities.

There’s more to their popularity than just hype, too: studies have shown that resistance bands can increase muscle strength, muscle size and decrease body fat at a similar rate as weight training.  The muscle activity and muscle peak load are similar during training for resistance bands and free weights, and they both provide exercise with free range of motion, variable speed of movement and progressive resistance. 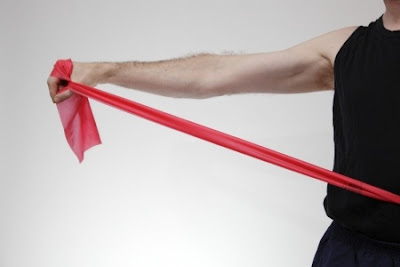 Where resistance bands differ is in their functionality. Bands do not rely on gravity to provide resistance and give a continuous tension throughout the range of motion.  The resistance of the band increases as the range of motion increases, allowing the muscle to work all the way through the range. Resistance bands also translate better into functional movement patterns for daily tasks and sports related training: exercises can be done in multiple directions and planes relating more to natural body movements, such as twisting one’s trunk, reaching, kicking a soccer ball or swinging a tennis racquet. Resistance bands can decrease the ability to “cheat” while performing an exercise, as momentum does not provide a big advantage.

Katie can be reached at katie@lakeshore-pt.com.
Posted by Lakeshore Physical Therapy at 6:26 AM