Elbow Pain, Could the Shoulder be to Blame?

As therapists in a clinic located inside of a large tennis club, we are seldom surprised when a number of our patients each year present with lateral epicondylitis – or, as it is more commonly known, tennis elbow. Lateral epicondylitis pain usually occurs over the outside of the elbow where many of the forearm muscles attach, an area that experiences a lot of strain in tennis. However, even those of us who aren’t on the courts every week should be aware of it: it is also common in people who spend a lot of time at the computer or perform lots of gripping during their day.

Despite the fact that lateral epicondylitis pain feels like it is centered in the elbow, it is important to look at the whole arm. Many people who come to us for tennis elbow have unsuccessfully tried exercises on their own that focus on the wrist and elbow, and are surprised when we turn our attention to the shoulder. Most specifically, the muscles that control shoulder blade position, such as the lower trapezius and serratus anterior, are crucial when treating the elbow, as the position of the whole arm is determined by the orientation of the shoulder blade.

Interested in finding some exercises that target the lower trapezius and serratus anterior to help maintain the shoulder blade in its optimal back position? I’ve included some below: 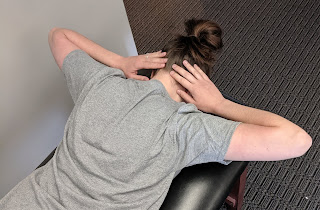 Easier Lower Trapezius
Lie on stomach and roll up a small towel under forehead and place hands on back of head/neck. Squeeze shoulder blades back and down toward opposite pants pocket and lift up elbows. Hold for 5 seconds and perform 5-10 repetitions. 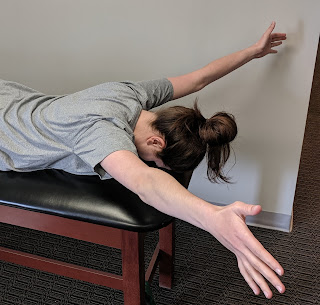 Lie on stomach and roll up a small towel under forehead. Lift your arms up so they make a “Y” shape. Squeeze your shoulder blades back and down toward opposite pants pocket and lift your arms. Hold for 5 seconds and perform 5-10 repetitions. 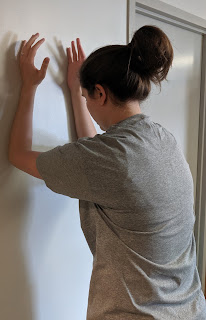 Try these exercises and let us know what you think! If you do have pain that is persistent, please stop by to speak with one of our skilled clinicians, who can help you with your injury.