Move over, tennis and golf – here comes pickleball! A new favorite pastime among Baby Boomers, this sport combines elements of badminton, tennis and ping-pong. In recent years, it has become popular with older adults because of the smaller court, lower net, and slower ball speed. The rules are fairly straightforward and easy to learn, so pickleball easily becomes a fun social activity. It can be played indoors or out, in singles or doubles.

Over the past decade, however, the pickleball craze is taking hold at all age levels. Teenagers often play it in their physical education classes, and it is showing up as an intramural sport on college campuses. According to the USA Pickleball Association (USAPA), the sport has seen a 650% increase in numbers over the past six years. On-site pickleball courts are now being built not only at many retirement communities, but also as part of community park districts. The equipment – wooden paddles and plastic, whiffle-type balls – is also affordable, making it accessible to be enjoyed by a wide range of people. 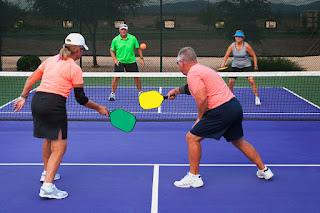 Here is the pickleball rule overview:
Lakeshore Sport & Fitness in Chicago is planning an intro to pickleball class on Sundays in the fall of 2019. Please contact LPRacquet@LakeshoreSF.com for more information. The Chicago Park District is also growing their program and information on additional places to play can be found here: https://www.chicagoparkdistrict.com/taxonomy/term/2210

References:
https://www.usapa.org/
Posted by Lakeshore Physical Therapy at 11:25 AM