The plank is a common exercise with which most people are likely familiar: even if they have never tried to do a plank themselves, they have likely seen someone doing a plank at the gym or read about it in their favorite fitness magazines. But what is all the fuss about? Is it really such a great exercise? 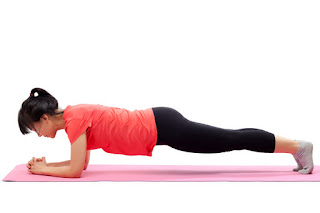 Moreover, the plank is generally a safe exercise because it is isometric, meaning that muscles maintain a constant length as they contract and body parts do not move. This is easier on one's joints than other types of exercises in which the body changes position, such as sit-ups. The plank requires minimal time and can be performed without any equipment, making it easy to sneak in anytime, anywhere.

Consider mixing up your routine by trying out some of the variations below! As with any type of exercise, remember to breathe throughout and stop if you have pain. It is recommended that you consult your physician or physical therapist before beginning a new exercise routine.