We don't often think about it consciously, but as three-dimensional beings we naturally also move in more than one dimension. In fact, there are three distinct places of motion - sagittal, frontal and transverse - and all are required for our bodies to move with functional smoothness.

The most common plane of movement, the sagittal plane, divides the body into right and left halves. In this plane, we use the strength of our muscles to move forward or backward (flexion and extension). Key muscles such as the quadriceps, gluteals and biceps are typically worked in the sagittal plane: for example, a lunge forward or backward, which can be made more challenging by adding another sagittal exercise such as a bicep curl. 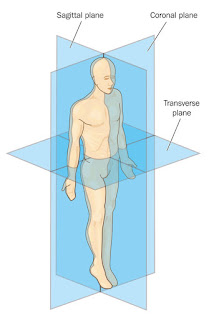 If we take an imaginary line and divide the body into front and back halves, this is the frontal or coronal plane. Movements in this plane are always sideways motions, called abduction (away from the center of the body) and adduction (toward the center of the body). Some of the muscles that work in the frontal plane include the middle deltoid, adductors (inner thigh) and gluteus medius. These muscle groups work as stabilizers to control the forward and backward movements in the sagittal plane. Sidestepping with a band around the ankles is an example of a frontal plane exercise.

The transverse plane, the plane most overlooked in exercise routines, divides the body into top and bottom halves. Movements in this plane are rotational in nature and critical in sports for pivoting, batting and golf swings. Common transverse plane muscle groups include the gluteal and adductor muscle groups and the rotator cuff. An example of an exercise in this plane would include a chop with a medicine ball.

A well-balanced fitness program should incorporate exercises along each plane of motion. By incorporating multi-planar movements in our warm-ups, strength training and stretching, we can reduce overuse injuries and muscular imbalances.
Posted by Lakeshore Physical Therapy at 8:07 AM